This is the Development Environment. PHP Version: 7.2.30. It may use a different database than production.
Skip to main content
Home > About the Cairn Terrier > Cairn History

The Cairn Terrier is a terrier breed originating in the Scottish Highlands and recognized as one of Scotland's earliest working dogs.

There is evidence that one of the oldest-known strains of Cairn, or “Short-haired Skye Terrier,” as the breed was generally known at the turn of the century, was founded by Captain Martin MacLeod of Drynock, Isle of Skye. Captain MacLeod was a great Highland sportsman and an enthusiastic otter hunter. He maintained a pack of silver grey Short-haired Skye Terriers for forty years before emigrating to Canada in 1845. The Drynock strain was kept alive by Mr. John Macdonald, Bridge of Ose Kennels, Isle of Sky. Mr. Macdonald was a gamekeeper to the Clan Chief MacLeod of McLeod, Dunvegan Castle, for more than forty years. In 1917 he wrote that he and his brother had this Drynock strain for the last seventy years. The Mackinnos of Kilbride was another kennel of good Short-haired Skye Terriers. These terriers were descendents of an old breed owned by Farquhar Kelly of Drumfearn, Isle of Skye in the seventeenth century. All of these strains played a part in the early lines of the breeds pioneers.

In 1933 one of the most influential and important Cairns of all time was whelped. Eng. Ch. Splinters of Twobees (click link for pedigree) would go on to indelibly mark the breed. The winner of eight CCs and his prowess as a stud dog made Splinters an important contributor to setting the type we know today. Splinters can be found in the pedigrees of many of the top winning and producing dogs of today. 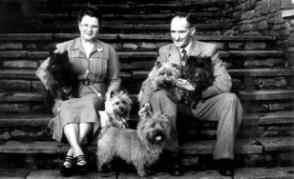 The genesis of the American Cairn lies with the importation of Eng. Ch. Redletter McRuffie by Betty Hyslop to Canada. McRuffie, a great grandson of Ch. Splinters of Twobees, was bred by Walter Bradshaw of Redletter fame. McRuffie and his descendents Ch. Cairnwoods Quince and Ch. Cairmar Fancy Dresser would forever stamp their names in the history of the Cairn in the United States. One is hard pressed today to find a Cairn without one of the above dogs in the pedigree.

Join The Cairn Terrier Club of America, Get the News!

Join the CTCA and become part of America’s largest group of Cairn Terrier enthusiasts dedicated to protecting the breed and educating others on all facets of Cairn Terrier ownership. Members receive The Highlander magazine, annual yearbook, Cairn Connection email updates, and qualify for CTCA trophies. With your voice, you will help the CTCA shape AKC policies to protect our wonderful Cairns. Join and share your passion!